Reddit's new design makes it clear that Reddit is now fundamentally a discussion forum, not the aggregator of interesting links and things to read that it started out as and used to be. So it goes.

To explain this, I need to show a screenshot of the new and the old design. Let's start with the new design: 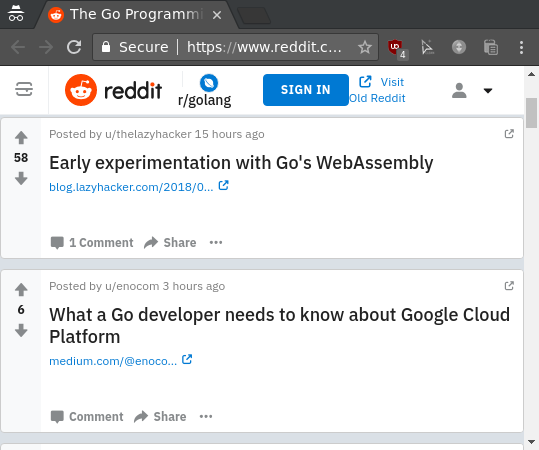 Ignoring all of the white space for now, look at the nice big title. Do you expect that to link to the actual article? Surprise, it doesn't; it takes you to the Reddit discussion of the article. The actual link to the article itself is the blue text in a much smaller font, and you can see here that it's truncated when displayed (despite how much extra space there is to show it in full). This design mostly wants you to click on the big prominent title, not the small, hard to hit blue thing.

(It turns out that you can make this more compact, but that doesn't make the links any bigger or more obvious.)

About all you can say about the prominence of the actual links in this design is that they're in blue, but modern web design is such that I'm not sure people these days assume that blue is a link instead of, well, just blue for some reason.

Compare this to the old design:

Here the prominent titles, which are the things that are both the most obvious and the easiest to click on, actually link to the article. They're also the standard blue colour, which might actually be read as links in this less ornate design. This design also has a sidebar of useful links that go to places outside of Reddit, a sidebar that's not present in the new design no matter how wide you make your browser window.

(The old design also shows visited links in a different colour, as Reddit always has, unlike the new design.)

It's pretty clear to me that the old design intended people to click on the links to articles, taking you away from Reddit; you might then return back to read the Reddit comments. The new design intends for you to click on the links to the Reddit discussions; even on the individual discussion page for a link, the link itself is no more prominent than here. As it is, posts to r/golang and elsewhere are often simply on-Reddit questions or notes; with the new design, I expect that to happen more and more.

(I'm not terribly surprised by the new Reddit design, for the record, because it's very much like the mobile version of their website, which has long made the discussion page prominent and easy to hit and the actual links small and hard to hit. On mobile this is especially frustrating because you don't have a mouse and so hitting small targets is much harder. Perhaps the experience is slightly better in their app, but I won't be installing Reddit's app.)

I don't know if Reddit has been clear about their priorities for their new design; perhaps they have been. But it hardly matters since regardless of what they may have said, their actual goals and priorities show quite clearly in the end result. Design is very revealing that way.

Of course sometimes what it reveals is that you have no idea what your priorities are, so you're just randomly throwing things out and perhaps choosing based on what looks good. But competent design starts with goals and with the designer asking what's important and what's not. Even without that, decisions about things like relative font size almost always involve thinking about what's more and less important, because that's part of both how and why you decide.

These are my WanderingThoughts
(About the blog)

This is part of CSpace, and is written by ChrisSiebenmann.
Twitter: @thatcks
Mastodon: @cks

This is a DWiki.
GettingAround
(Help)

This dinky wiki is brought to you by the Insane Hackers Guild, Python sub-branch.